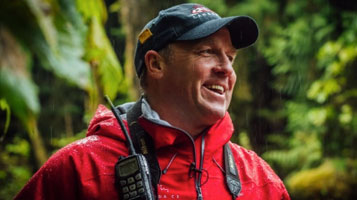 A good leader is constantly looking in the mirror

Founder and President of the Students on Ice Foundation

Geoff Green, C.M., PhD (Hons), FI’03, FRCGS is the Founder and President of the Students on Ice Foundation, a globally recognized organization that takes youth, scientists, elders, artists and leaders from around the world on educational journeys to the Arctic and Antarctic. He is an educator, social entrepreneur and adventurer who has led over 135 expeditions around the World. He is also Chair of Ottawa Riverkeeper. Geoff was selected as one of the Top 25 Transformational Canadians by the Globe and Mail, CTV and La Presse. Geoff was appointed to the Order of Canada in 2012.

“I know all the ropes, I am a Canadian”

At 19, I was hitchhiking in Europe and ran out of money in the South of France. I thought I might get a job on a yacht but they all told me to get lost. I turned to walk down the street, rather dejected, and passed a down-and-out looking fellow. He looked at me and asked “Qu’est-que tous fais, monsieur?” I told him I was looking for a job on a yacht and he pointed at one I had not approached and told me to try them. I went on board and ended up speaking with the UK-based owner from a payphone. He asked me a few questions and I said “Sure, I know all the ropes, I am a Canadian”. By the end of our conversation, he asked me to board the boat that night as the new captain.

I ended up being the pseudo-skipper for a few years. It was an older yacht, and I spent a lot of time repairing things.

My first experience of leadership was on sports teams

I grew up close to Newcastle and Orono, small towns in rural Ontario. My parents gave me a great deal of freedom. It was an age of innocence to some degree and we had few boundaries growing up.

Sports were very important to me and some of my first experiences of leadership were on sports teams at school and becoming school president in Grade 8. When I went to University I got involved as a leader in student government and varsity sports.

I was an elementary school teacher in another small Ontario town, Colborne, for a while and loved it. My dad was a teacher and principal and I knew the education system. I taught every kid in school French, Music and Physical Education, every day. My French was not great, though it was enough to get me the job. I mostly just played and had fun.

At one time, I led a canoe adventure company in Kingston where I chartered a 42-foot sailboat to take groups out on the lake. We got a contract with the Queen’s Executive MBA program – we had the experience, but no insurance, no license, nothing. Like many entrepreneurs and business owners I just got into a habit of getting things done.

I was leading Pole to Pole expeditions

I was invited to the Arctic by a friend to join an expedition to Ellesmere. They were looking for someone to drive a Zodiac boat and he knew I had some experience with boats. Being introduced to the Canadian High Arctic was a watershed moment in my life and opened my mind to an extraordinary part of Canada and the Planet.

The following year they asked if I would go to the Antarctic. I was working for a company which gave young people like me unbelievable leadership opportunities. Fast forward a few years, and I was leading Pole to Pole expeditions. I was way too young and inexperienced but being thrust into the role forced you to sink or swim. That was when I started honing my communication and leadership skills.

Determination won through and Students on Ice was born

By the time I was 32, I had led expeditions all around the world to some of the most remote and amazing places. In between the Arctic and the Antarctic, we would sail across the South Pacific, or up the mid-Atlantic Ridge, visiting every little island along the way, like Tristan da Cunha and Pitcairn.

We visited extraordinary parts of the planet and traveled with inspiring people from all over the world – scientists, tourists, adventurers.

I noticed how profoundly impacted these people were by the beauty, scale and power of the Polar regions. We talked about flora, fauna, culture and history and I saw how those regions were amazing classrooms.

I started to conceptualize an idea to take youth on expeditions to the Polar regions while I continued to lead expeditions for four or five years. Determination won through and Students on Ice was born.

He was the epitome of a humble leader

One of the people who inspired me was Dr. Fred Roots O.C., a Canadian geologist, Polar scientist and explorer. He had been to the Antarctic in the 40’s, as part of the very first international scientific research expedition. When I met him, he was in his late 70’s. He was the epitome of a humble leader and a great visionary. I loved the fact he could walk into a room and command respect; when he talked, everyone listened.

Another mentor was Dr. Fritz Koerner, a great Canadian glaciologist. He had a lovely irreverent style about him and never took himself too seriously. One of the things I admired about both Fritz and Fred was their ability to relate to all people, particularly youth. Youth liked spending time with them. Teenagers can detect genuine passion and knowledge, and interest in them as people. They can also see through bullshit pretty quickly.

Mary Simon O.C. is another amazing Canadian leader who threw her support behind Students on Ice in the early days. She was Canada’s Circumpolar Ambassador at the time and her mentorship and friendship continue to this day.

He was a big thinking leader with crazy ideas

Sir Ernest Shackleton was a leader I greatly admire. The core of his leadership success was he cared so much about his men, and he did all these little things to keep them motivated and inspired. He was a big thinking leader with crazy ideas. He was very deliberate about building his teams, one person at a time, and in the face of pressure he was calm, cool and flexible. It was his optimism I love most about Shackleton.

What motivates me as a leader is having a positive impact

If I had to define my leadership philosophy, people would be at the centre of it. Students on Ice has only succeeded because of great people and great partners. I came up with the idea, but it was very much a “build it and they will come” approach. I love being the connector and helping others.

As the leader, I used to be reluctant to let go; now I am all about “take it on”. I am a good leader, though not a great manager, and I continue to learn how to delegate effectively.

What motivates me as a leader is having a positive impact and making things better. It is about trying to give opportunities, change lives, inspire, motivate and connect.

I could have stayed in the for-profit world and built a successful career. In fact, when we developed Students on Ice, MBA students were always pitching me with, “Let’s scale this and generate some money”. But we wanted it to be available to all youth, no matter their background, wealth, or what part of the world they were from.

We had started treating it like a non-profit even though we did not have charitable status for another five years.

A good leader is constantly looking in the mirror

I like getting things done and I am often impatient to find solutions. I guess, being a doer is part of my DNA because I like to act.

Part of being a good leader is constantly looking in the mirror, knowing you can always be better and do things differently. It is also about caring for the team.

We have developed three fundamental mottoes in our office and on our voyages: Flexibility is the Key; Good Karma Makes Things Happen; and Teamwork Makes the Dream Work. I use our mottoes all the time when I am talking to the team.

We try and lead by example on the expeditions

We try and lead by example on the expeditions. It is not what we tell the youth, so much as the example we set. In some cases, the youth are being put into a warm, nurturing, caring, positive environment for the first time in their lives. When you put them into that environment all this stuff starts to come out. We need to be prepared to deal with this personal process of growing and healing.

They are places for magic to happen

One of the things I love most about these expeditions is that they are places for magic to happen. You put CEO’s, politicians, youth, elders, scientists, artists and musicians together on a ship and they cannot get away from each other. You do that in some of the most remarkable places on the planet and wonderful things happen.

We have such a diverse set of youth participants from around the World with very different life experiences. They might be struggling, dealing with difficult challenges, and maybe do not want to finish high school. Then you have other kids who are the over-achievers who are already on a mission in their lives but are still learning and trying to figure things out.

There might be an experience, conversation or a person you meet randomly one day who will shape your life. We see it on these expeditions all the time because we immerse youth in new experiences and introduce them to new people, perspectives and fresh ideas.

Be ready for opportunities because our life-journeys can change fast

When I am talking with youth on our Students on Ice expeditions, I invite them to learn, be determined, and follow their path of passion. If you are doing something you really love and have passion for it, then good things will happen. We invite them to be ready for opportunities because our life-journeys can change fast.

I look back at that moment in my life in the south of France. If I had gone one way instead of another, I would have flown home, gone back to school, perhaps become a full-time teacher and led a different life. Serendipity is a big part of my life, as is having an open mind and an open heart.