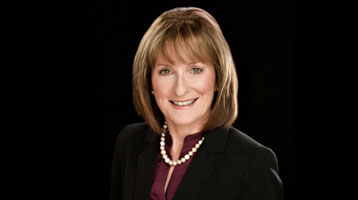 To be a leader you have to be vulnerable

President and CEO of Algonquin College

Cheryl Jensen is the President and Chief Executive Officer of Algonquin College. Cheryl joined Algonquin in 2014 from Mohawk College, where she was Vice President, Academic, from 2009. She started her career as a chemist at Stelco Inc.and Procter & Gamble. Under her leadership, Algonquin College has formed new partnerships with The Ottawa Hospital, Siemens Canada, The Perley and Rideau Veterans’ Health Centre and Shopify. Cheryl is the recipient of a national leadership award from the Association of Canadian Community Colleges and a Hamilton YWCA Woman of Distinction award. She holds an Honour’s Chemistry degree and a Certificate in Metallurgy from McMaster University, and a Master of Education in Organizational and Administrative Studies from Brock University.

My first job out of University was working for Procter & Gamble as a chemist. Even though I really enjoyed it, I recall saying to my husband after a couple of years, “I don’t think making a better toothpaste is what I am meant to be doing for the rest of my life”.

In fact, coming out of school I was debating between being a teacher or a scientist. My first inkling of my future was winning a book token award in Grade 10 and buying a book titled, “The Managerial Woman”. I think I just liked the title.

I developed a love for international education and teaching

I am a Steeltown girl, born and bred in Hamilton, Ontario. I worked at Stelco developing methods for occupational hygiene and safety for workers. I just loved the development work. Then, after a tough four-month strike in 1981, I got laid off. We had just bought a new house and it was hard not to take it personally. As I started to look for work, Mohawk College offered me a contract to teach physics and chemistry to 30 men from Libya. By the end of the contract, I developed a love for international education and teaching.

I taught chemical technology at Mohawk for 16 years when I was asked to apply for a chair’s job in a completely different field – electrical engineering technology. We had a very forward-thinking Dean who was retiring and who wanted me to apply to be the next Dean of Engineering Technology and Trades.

While I was Dean at Mohawk College, we built a brand new, state-of-the-art building for our students. I had promised the government funders we would be full when we opened. I remember one guy from the government saying later, “How could we say no to you, Cheryl? You were standing in the parking lot of this warehouse, waving your arms about, sharing your vision of what you wanted to build”. I learned a leader’s enthusiasm, and her ability to work through other people, can make things grow.

I feel a personal responsibility to the 22,000 students at Algonquin

Being a mother is the most important role in my life. Not only being a mum and making sure they ate well and did their homework, but also to show them they could have whatever future they wanted.

I was a faculty member when our three children were young. When they went to bed, I did my marking and administrative work. When they got a little older, I took a Master’s in Education and Organizational Development.

I wanted my children, especially my girls, to learn through my example – with hard work, they could do it. It is not easy, but if you set your mind to something and if you have a dream, then you can do it.

My maternal instincts do not stop with my kids. I feel a personal responsibility to the 22,000 students at Algonquin and everyone who works here. It is what drives me now.

The thing I fear the most is disappointing people

Leadership is about serving people. It is not about making sure you are paid well or you have the perks of the job; it is about making the place a little bit better when you leave, than when you came. The thing I fear the most is disappointing people.

We had a pretty serious five-week faculty strike across Ontario Colleges last year which caused me to lose sleep. I worried about our learners finishing the term, and I worried about faculty. It was like having a disagreement with your family when you are not communicating well. It was a tough period. These are times when I worry about the burden of leadership.

The Executive team looked at me like I was crazy

There was a lot of unhappiness after the strike. We had many discussions at the executive table about it and someone asked if everyone knew why we worked at Algonquin College.

So, I put out a challenge to my team. I said, “I want everybody in this college to be able to recite our mission in a month, To transform hopes and dreams into lifelong success“. The Executive team looked at me as if I was crazy. Even the Union newsletter chastised me for wasting time getting people to learn our mission. It soon became a fun competition though with groups sending out tweets about what they were doing and it brought people together.

Unless you can inspire people to believe in the vision and the mission of your organization, you are not going to get people to do things.

Part of my role is building the right team

I have a sign in my office which says, “Make ideas happen”. We have a great process for developing our strategic plan, although I know if we don’t take action it just sits on a shelf. As part of our strategic plan, I hold my team responsible for making sure we are delivering on our goals every year.

In order to make things happen, part of my job is building the right team. Not just the right people, but the right roles. I recruited Algonquin’s first Executive Director, Truth, Reconciliation & Indigenization. We have a growing indigenous student population and we need to be relevant to that community. It is important we make a statement that we do not just train people, we are part of a movement to change things for the better.

I huddle with my executives every morning for 15 minutes

We are developing something called the AC Way, like the Toyota Way. We use lean principles to be efficient and to build engagement. I huddle with my executives every morning for 15 minutes to talk about student safety and communications. When we started doing huddles, it became evident we were not very metrics-driven. Now we have regular reporting on goals, deliverables and due dates.

I do book reports with my Executive team. For example, we read Beyond Heroes, which is a Lean Management System for Healthcare. It is not enough that one doctor, or hero, can change a patient’s outcome, everyone needs to feel they can make a difference. The parallels in Education to me are how we invest to change the way things are done at Algonquin.

Then we read Extreme Ownership, about How U.S. Navy Seals Lead and Win. The message is, we all have to own what we are doing. Failure is not a bad thing, if you are comfortable with it. It is not good enough in a meeting to say, “I was waiting for someone to get back to me”.

I tell people to lead from their heart

I lead from the heart. I tell people to lead from their heart; you will make mistakes – nobody is perfect – but you will be leading in an authentic, genuine way.

In 2014, when Corporal Nathan Cirillo was shot at Ottawa’s National War Memorial, our Executive team was off-site at our Pembroke facility. Our emails and phones were going crazy and, for a while, there was a very real worry about other shooters and being under attack. The following morning, I heard the prime Minister talk to the nation and I realized my job as leader was to talk to the College. I wrote my note from my heart and communicated it to the College through social media. I told the entire Executive team, “Cancel every meeting you have today and walk the campus. Make sure everyone feels safe.”

To be a leader you have to be vulnerable

I grew up in a very male-dominated world: Steeltown, technology and faculty. As a woman, you can build a wall around yourself. To be a leader though, you have to be vulnerable, to show your feelings. You cannot cry all the time, but you have to show your own uncertainties. Very often I will say, “I do not know how to do this” and I will bring in the Executive team. Once you do it, you get this freedom that you do not have to know everything – it is liberating.

Sometimes, I get choked up when students come and see me about issues. Some of my staff think I have too much of an open door, but if someone has enough courage to come right to my door, I am not sending them away.

Leadership is not a straight-line path

One of the biggest learnings moving from VP to President is having the courage to make important statements that are unpopular. I learned this from my dad, who taught his three daughters to have the courage to stand up for ourselves. As I have grown, I think I have developed more courage.

I tell students that leadership is not a straight-line path. It is a journey and there is luck involved, along with serendipity and the need to seize opportunities as they arise. Just try it. When I read Sheryl Sandberg’s Lean In, one phrase jumped out at me, “What would you do if you weren’t afraid?” It helps me make decisions every day and I invite students to think about that when they have a knot in their stomach.

I learn from our students, all the time

My children and our students have taught me a lot about the future. I remember very clearly sitting at the kitchen table with my mother-in-law and my daughter when gay marriage became law. My mother-in-law, who was an angel on earth, said, “This shouldn’t be bothering me, but it does”. I said, “It doesn’t bother me at all”, and my daughter said, “Why are we even talking about this?” It just shows in three generations how things can change, and I see it with our students and what they believe is important. I learn from our students, all the time.

I could not even say thank you, I was too choked up

We have a Manager of Inclusion and Diversity who stood up to talk about our strategy for inclusion. We want to be welcoming at Algonquin and have inclusive hiring practices. She invited me to be a part of a video about inclusivity and when she showed it back to us, it was so beautiful I could not speak. I could not even say thank you, I was too choked up.

It is the 22,000 student stories which drive me. Everyone is unique and every story is special. We are shaping young lives here which has led me to a more meaningful life than making a better toothpaste.