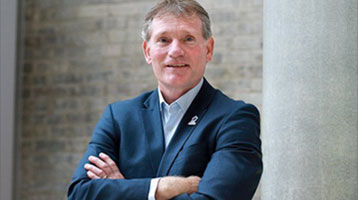 Most good leaders are lifelong learners

Cyril Leeder is the CEO of the Myers Automotive Group, a family-based company with 15 dealership locations and 1,000 employees in Ottawa. Prior to his current position he was the president of the Ottawa Senators, having been one of the founders in 1992. In addition to serving on the boards of numerous charities and businesses, Cyril has worked with a group dedicated to attracting major sporting events to Ottawa and on development projects such as the Ottawa Convention Centre. He currently sits on the board of the Ottawa Board of Trade.

I tell people the best way to learn about leadership is to work for the best leaders in town. In my time, I thought the top guys in Ottawa were Terry Matthews, Michael Copeland, Bruce Firestone and Rod Bryden and I got to work for two of them – Bruce and Rod.

Every problem is an opportunity

From Bruce I learned every problem is an opportunity. He used to say, “if it was easy someone would have done it by now”, and to always remember the journey is going to have some tough spots and to be prepared for them.

Rod was really calm in the face of adversity. The more difficult the situation, the calmer he became. He led from the front and was not afraid to jump in when the organization, or an individual, needed help. When the sky seemed to be falling, his leadership became calm, measured and calculated. It was “How do we fix this?” never “The sky is falling”.

You learn the most when the business is stressed

“Cyril, I don’t need you making decisions on hockey”

Bruce ran an entrepreneurial, collegial, small operation. He wanted to start a new business every three to six months. Most of them were very collegial so if you had an issue, we would call everybody into a board room, “What are we going to do about this? Okay, good”. I got used to that style of management.

When I transitioned into a Sports Entertainment company with the Ottawa Senators, Rod’s style was quite different. Rod would say, “Cyril, I don’t need you making decisions on hockey, I need you to get the building built”. I had more responsibility with a larger mandate so I learned about managing the bigger picture.

When I was at the Ottawa Senators, one of the best parts of our management group was we had been together a long time and knew each other well. The guy across the table had been your colleague and your friend for ten, twelve years. Accountability becomes an issue when you are friends with everyone though.

Through an external coaching process, we were able to agree we could still be friends and hold each other accountable. Accountability is not a bad word and we did not let it affect our personal relationships. Many companies have Key Metrics and Dashboards but the way you use that information is a big part of Accountability. Holding people accountable is one of the toughest things to do.

No-one should doubt my passion

I have to be crystal clear on my expectations on my team. I have to know the “What” and my team has to tell me the “How”. We might have a discussion about the resources they require but they need to understand what they need to achieve.

As the CEO, a large part of the role is to look outwards. I only look inward to make sure the team is doing what I expect and that is where Dashboards can help. No-one should doubt my passion – you have to believe in what you are doing.

In a company like Myers Automotive and previously with the Ottawa Senators, I have the extra responsibility to manage up. I report to owners, unlike an entrepreneur who leads their own business. I spend 10%-20% of my time managing up to make sure there is alignment, and the rest of the time delivering on the mandate. I may not always agree with the owners but we have to be able to have an exchange of ideas, a tough discussion, because this is where you get alignment.

There are tremendous headwinds facing the automotive industry which was part of the attraction of this job. How do you navigate when North American new car sales are down this year for the first time in ten years and forecast to continue to slide? We have to adapt our sales plans for new and used cars and develop best-in-class delivery systems.

There will always be headwinds facing any industry: it is how quickly you recognize them and adapt that defines the winners.

I saw my dad work on his accounting studies, probably four nights a week

I grew up in Brockville. My father was an accountant, and I naturally gravitated to becoming an accountant too. He started working when he was 16 and then put himself through an accounting correspondence course. Growing up, I saw my dad work on his accounting studies, probably four nights a week, at his card table. His perseverance and commitment to bettering himself stuck with me and became part of who I am.

Most good leaders are lifelong learners

I have been a leader since I was a kid. When there were 20 people sitting around the baseball diamond, I would be the one organizing the game. I was never afraid to make decisions. I have always enjoyed team sports more than individual sports which is probably why, when I got my accounting designation, I chose to move into business rather than seek employment with an accounting firm.

My leadership improves as I age. I am a better senior manager now than when I was in my 20’s or my 30’s. It’s a natural progression as most good leaders are lifelong learners – they have an urge to continuously improve. It is a quest for knowledge and, combined with a desire to win, leads to success.

I hate losing more than I enjoy winning

Authenticity is related to credibility. Do you have a good reputation? When you say something do people believe what you are saying? Do you follow through? Resiliency is a never-give-up attitude, that we are going to work through it; no problem is insurmountable.

I do not try to be what I am not, so I guess I am authentic. I am also very resilient because I do not give up easily. I hate losing more than I enjoy winning even though I am hyper-competitive. If I lose, I am a good loser, but I do not enjoy it.

I would rather be right 90% of the time

I like leading. I like being an operator of a company on some scale. I am able to deal with all the noise because I can compartmentalize the pressure. It is an extension of what I have been doing all my life, particularly in the world of competitive sports.

Get out in front of the news

I learned a lot about communications with the Ottawa Senators. Sports may be the only sector where there are eight pages of coverage on how you did in the next day’s paper, every game. One of the things you learn is to get out in front of the news, particularly if it is a tough trade or an organizational update. You have to let your stakeholders know in advance so there are no surprises.

Getting rid of people is not a pleasant thing to do

I was way too slow to make personnel changes early on in my career. When you are a young manager and you inherit a management team, getting rid of people is not a pleasant thing to do. You never get used to it but you have to be accountable to the rest of your team, and you have to make those changes. Just about anytime I hang onto someone for too long before moving them along, the rest of the team says, “What took so long?”.

Bryan Murray, the previous GM of the Ottawa Senators, was a guy from whom I learned about people skills. He talked to as many people as he could on any one day. He managed by walking about. He did not use a computer much and when he did make notes, they were mostly possible line combinations. If he needed to do player calculations, he would call in an accountant, or an assistant general manager, and say, “Here’s what I would like to have on our team next year. You guys figure this out”.

Bryan Murray’s strength was talking to people to get the pulse of the organization – what’s going on, what needs to change. He was a person who people looked up to and would follow because he cared about players and staff and built a rapport with each of them. Those are the people skills I try to bring to my role as CEO.