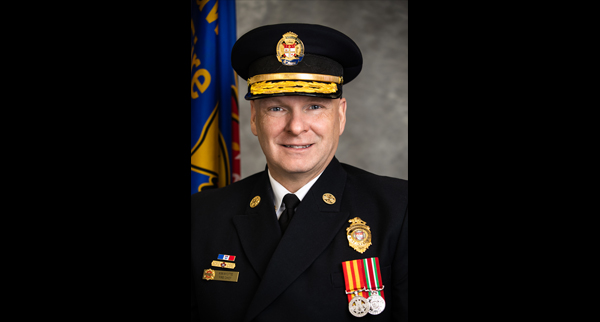 Success is all about lifelong learning

Kim Ayotte is Ottawa’s Fire Chief. For the past 16 years he has been a member of Ottawa Fire Services’ management team. Over that time, he has accelerated his learning at every opportunity, both academically and by investing himself in every position he has held. Using a structured approach, he positioned his career to acquire tangible experience as an active member of the Fire Leadership Team since 2011. He has held the substantive title for every Deputy Fire Chief position within Ottawa Fire Services and acted as Fire Chief for short term absences over the course of 8 years before attaining the rank of Fire Chief in August 2018. Through his leadership, he vows to provide a greater safety net for the residents of the community.

You have to be a decisive leader

At a fire scene, there is no discretionary time to make decisions. You have to be a decisive leader. We are a paramilitary organization, so being able to make decisions quickly in an emergency scene is critical. When a senior leader shows up at a fire scene, they need to get a very clear understanding of what is going on, very quickly, from the incident commander. As the senior officer present, they will be ultimately responsible, so they have to like what is going on. I only go to major incidents these days but it is the same for me. Once I have surveyed the site, my job is to communicate and relay a sense of calmness to the community.

An example of this is the recent four-alarm fire in Ottawa’s ByWard Market. It got hold in some historic buildings and was very, very difficult to extinguish. It was a dirty fire, because the fire got between the roof structures. When I got there, I quickly assessed what the incident commander had done and did a 360 walk-around of the whole facility. I agreed with the approach and I thought, “this is going to be a six-hour fire before we are done”, and I went to talk to the media. Once you have confidence in a situation you call it like you see it and add your experience, knowledge and judgement. You always have to be open and honest with the media and the public.

I do not micromanage my resources

I take my responsibility as the Fire Chief at a fire scene very seriously. I do not micromanage my resources as I have a lot of faith in the operational capabilities of our firefighters.

We have Standard Operating Procedures (SOPs) for all situations with a disclaimer that says, “SOPs can be deviated from, based on your experience, knowledge and situational assessment”. I tell people to do what they have to do to reach the objective, whether it is to save a life or something else, and to do no harm to themselves or their crew in the process. On the occasion when there is a deviation from a policy, we look into it. If there is clear reasoning behind it, everything is good.

Getting people to confess was important

I honed an ability to read people as an investigator for the provincial government. I investigated pollution incidents in the Hamilton area and was trained in interviewing skills. Later I became an arson investigator for the fire marshal’s office which took me to a whole new realm of criminal investigations. Because you had to prove things beyond a reasonable doubt, getting people to confess was important. It required new skills which I had to develop.

I recall one case where a wreath on a woman’s apartment door was set on fire. The damage was not severe but I was asked to investigate. When I talked to her, she accused her boyfriend. They had had an argument; he had stormed off and the next thing she knew the wreath was on fire. He denied everything. Eventually, I told him that I knew he did it and I could either tell the judge he intentionally tried to kill her, or I could say he made some smoke so she would open the door. He said, “No, I didn’t want to kill her,” and admitted that he lit the wreath to get her to come out. While this gave him a psychological out, it did not give him a legal out and he was charged with arson and later found guilty.

Conducting thousands of interviews has helped me read people, empathize and be a better leader. You have to understand the “Why” behind people’s actions and be comfortable with difficult conversations, without being threatening.

I learned compassion from my parents

I learned compassion from my parents. They were francophones in Elliot Lake, Ontario. My dad was a butcher and my mum was a cashier in a grocery store. They had five children and were well respected in the community. They were humble and always cared about other people. They did not just talk about respect, they showed it by respecting the diversity of all people, whatever their background, and really understood people are your best allies. They walked the talk.

We have done the same with our kids, teaching them compassion, respect and honesty. Our kids are in their 20’s now, living independent lives. When they were younger, we had lots of difficult conversations about what it means to be honest. I always told them it is a lot easier to be honest and deal with the consequences, than to be dishonest and lose your credibility. Honesty is one of my core values.

One of my keys to managing people is understanding what they bring to the table and using that knowledge to our mutual benefit, as opposed to trying to mold someone into something they are not.

We train our Fire Captains to take crews into burning buildings, save people and bring their crews out alive. Where we need to invest more is in training them in human relations, harassment, conflict resolutions and just dealing with people. Most of them are good; some are better than others. So now we are providing training to our leaders to handle people conflicts more effectively.

Sometimes you help people by having a difficult, honest conversation with them. I learned early on that honesty can hurt and the best approach is not to criticize a person’s character but to show them areas of responsibility where they can enhance their skills to progress in Ottawa Fire Services.

As the new Chief, I went on the road to talk with everyone

We have 45 Fire Stations in Ottawa and 1,500 career and volunteer firefighters. When I became Chief last August, I put out a briefing report to the staff with my six-point plan for the next 3 to 5 years, such as focusing on employee health and wellness. As the new Chief, I went on the road to talk with everyone, to listen, to understand and to share my thoughts.

We run about 25,000 calls a year with 80,000 vehicle movements. You used to have 17 minutes to get out of a burning building. With modern construction materials and techniques and without sprinklers in homes, you have 2-3 minutes these days before a room flashes over.

There are three lines of defence, when it comes to fires. The first is public education, the second is code enforcement, the third is emergency response. If you get to the third it is because you failed at the first two. I decided early on to concentrate equally on all three lines.

I have always been driven to be in a position to make a difference. In Ottawa Fire Services, the position where you can make the biggest difference is as Fire Chief. My decision to apply for the position when it became open was made simpler because we have a great team working on the floor so I knew I would not be inheriting a toxic environment. They did a national search, and I had several people say, “I don’t know why they’re doing a national search when you are here.” I responded, “It is a good thing. Because if I get the job, I will have been successful against the best in the country.”

One of the things I have learned as the leader is not to ask my deputies to do anything I am not willing to do myself. Sometimes, as the Chief, it is about delegation, follow-up and management. Being the Chief is being able to do all of those things you are asking everybody else to do. And, once in a while, you pick a real sticky issue and say, “I will take this one on, thank you very much”. I am proud to take issues on because it protects and grows my reputation amongst my team. It shows I am not afraid to jump into the fray.

Success is all about lifelong learning

The City of Ottawa has recently adopted a servant leadership model and the training includes very specific coaching tools. When you join Ottawa Fire Services, you intuitively understand the value of coaching because we run small teams out of our stations who work together all the time. When the captain gives out a task such hooking up a hydrant, he or she knows the task will be done because everyone has been trained. If it is not done properly, they follow it up with more training.

This also translates into management positions. Deputies and Chiefs are administrative type positions and you have to develop a new set of challenging competencies. Leadership can come naturally but it almost always needs to be accompanied by good management competencies. Developing these competencies in Ottawa Fire Services is difficult and that is why people have to consider higher education. Success is all about lifelong learning.

When I go to stations, I talk about harassment and bullying. We are a male-dominated environment and we have had to educate everyone on the difference between saying something funny and hurting somebody, or worse, bullying them. Adults know when they are bullying someone. They know it is wrong and I will not accept it.

Two thirds of our staff are unionised and, when I got here, managing in a unionized environment was a little difficult for me. Coming from an investigator’s job I was used to an adversarial relationship. One of the best bits of advice I got from a City lawyer was to build connections and look for negotiated agreements. We have a fiduciary responsibility to make sure we are protecting the City’s resources, but we can build respectful relationships where all parties can be successful. So, while the union president and I will disagree, we can be courteous, firm and respectful in negotiating with each other.

There is no such thing as a good fire

As the leader of the Ottawa Fire Services I can tell you there is no such thing as a good fire. From a morale-building perspective though, incidents which require strong action, quickly taken, with a successful resolution, create a spike in adrenaline and positive morale. (The opposite effect is true too, when a life is lost in an incident which can lead to PTSD or Occupational Stress Injuries, and we are very conscious of this danger). With a good outcome, the station can ride a surge of adrenaline for days as they debrief it and relive it. It creates a really positive environment in the station and we use it to strengthen our strong culture and esprit de corps.