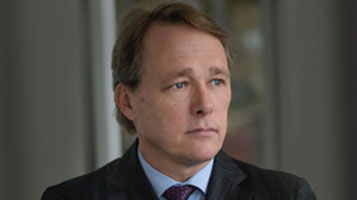 I think you must be curious to be a leader

Bruce Linton is the founder, chairman and CEO of Canopy Growth – the first cannabis producing company in North America to be listed on a major stock exchange. To date the company has enjoyed market support for capital raises of over $625 million including a $245 million investment by Fortune 500 beverage company, Constellation Brands.

After beginning his career at Newbridge Networks Corporation, he has held positions that include general manager and re-founder of Computerland.ca, president and co-founder of webHancer Corp, and was part of the establishing team at CrossKeys Systems Corporation. He is the past chairman of the Ottawa Community Loan Foundation, past board member and treasurer of Canada World Youth, past board governor for Carleton University, past president of the Nepean Skating Club, and past president of the Carleton University Students Association.

I am a socialist who wants to drive a Jaguar

I am a socialist who wants to drive a Jaguar. I want and expect to do very well but I don’t seek wealth if everyone doesn’t do relatively well with me. This is why I issue massive stock options to my staff, and my companies always run out of options. I think it’s because I did not grow up particularly well off. I grew up with a mother who would spend the same amount at Christmas, to the penny, on myself and my brother. It was to the point where people sometimes thought we were twins because she wanted to be fair and we got identical clothing.

Every time I am successful, I am leading

There is a difference between good leadership and good management. It took me until the last five to seven years before I realized every time I am successful, I am leading. I am taking charge of the direction, explaining why we are doing something and not doing all the inputs.

Good management is about execution against that direction and I am not the best at it. Management turns the strategy into organization charts, budgets, Key Performance Indicators, annual reviews, action plans etc. Management is about discipline; leadership about is gathering input to get total clarity on what you are doing and why.

I have become largely unemployable

I have always been bad at not leading. I am better at being the captain on the hockey team than a player, even when I am not the best player. I was always better to be the president rather than the vice president; the chair rather than the board member. I have a phobia that someday I will be doing nothing and there will no microphone and no audience and I won’t be allowed to speak.

“I don’t know what this dude does”

I had no clue what was going on in the world when I was at Carleton University.  It took me six years to do a four-year program because I got into every activity on campus. I had no clue what happened next. I never had a plan. You get to the busy street and just go. I sat on the board with Terry Matthews at Carleton and he was good with students. I thought, “I don’t know what this dude does, but he is on the board and he does not perceive the problems with universities to be the students, so that’s a good thing”.

When I left University, I went straight to work for Terry Matthews at Newbridge. He was my very first boss and I thought he was normal. He flies all over the world; harangues people; always selling, telling stories; trying to understand things; keeping people focused. He likes to talk with people and get quarterly updates. He knows everything that’s going on. He still jokingly refers to me as a trainee, even after 25 years.

Half of life is showing up

I have had the good fortune to work with or get to know some great Ottawa technology icons – people like Terry Matthews, Rod Bryden, John Kelly, Mike Copeland. All of these people have special skills and you can take value from each of them and mix your own soup. Half of life is showing up and getting in the middle of things. Getting involved is a really good way of figuring out what to do and how to play.

As you get older, it becomes a lot easier to figure out what will work. Especially if you have lived through a lot of change and uncertainty. In the context of Canopy we have to work through changes in technology, government regulations, infrastructure, public policy, standards and global business. My experience helps me figure out the strategy much more quickly now than if I was still in my 20’s.

I get a sense for how a person will connect

My accuracy in picking the right person is improving and I am more willing to make the necessary changes. I get a sense for how a person will connect to the other pieces of the operation. As the CEO of a fast-growing company, you must be willing to make lots of mistakes and keep trying, keep moving forward.

If people are going to get a speeding ticket, I hope they get it when they are on their way to work because they are excited to get there, not when they are going home. If you are not excited about where you work, you’ve got it wrong.

When you are networked into a world and you know what you need to achieve, a whole lot of people want to help you achieve it. I have people who have been with me for years in many of my companies. The reason people stay here is because we want to change the world. They are treated responsibly; their interests are respected. They work in an environment where they want to work because they are excited to be here. Loyalty buys a lot.

I like that people stay because they know they work at the energized global leader. People feel they are an integral part of the company. I love the fact everyone likes to be part of something.

The pause to celebrate is almost zero

We try to be encouraging when people make mistakes.

We have a culture crew which looks at how to build the culture at Canopy. We are in a sector where the methods to succeed are developed each day which means the culture of thinking, sharing and collaborating beats strategy every time. You cannot have a strategy for all the unknowns in our sector because the sector changes so frequently. Our culture is more like Google’s than a pharmaceutical company.

I have a bunch of people who get impatient with me, which I love. People are on my case because I don’t respond to their emails quick enough. We are moving so fast the downside of our culture of “Let’s get things done” is the pause to celebrate is almost zero. We need to work on this.

We have 10 debates a day in the leadership team. It’s awesome. We care about everything, even how the place looks down to a brick façade. I welcome all constructive arguments.

I find the absence of activity stressful

Emotional maturity – a sense of touch and feelings about people’s stresses – is important for a leader. I am probably moderately juvenile when it comes to emotional maturity.

To me, stress is when nothing is happening.

I find the absence of activity stressful because it’s soon followed by financial despair. I am not dismissing “busy stress” because I know people suffer from it and it’s a serious problem, but I don’t feel it the same way. The time I get stressed is when our balance sheet gets low on cash – that is a sleep depriving event. I have done about 15 rounds of financing in this business and for 14 rounds of it I had stress.

I think you must be curious to be a leader

Curiosity and Courage are drivers of leadership. I never want people to ask me, “What happens when I push this button?”. Push the button and figure it out! How can you not push the button? I think you must be curious to be a leader. How do you do anything new if you are not curious? Leaders should be more curious than others because leadership means going to new places. Leadership is about drawing the map while you are using it which means finding out bits of information as you are moving forward, to put the map together.

Starting Canopy took curiosity and courage, I suppose. I thought everyone would start something like this in 2013 and I was surprised they didn’t. Almost everyone I asked, told me it was probably the worst idea I’ve ever pursued. Was I out of my mind? Courage can be misinterpreted as confidence. Sometimes you don’t know what to do and you figure it out as you are going along.

Canada is a tough place to be a leader

My leadership style is to decide what I am going to do, say I am going to do it and then feel an obligation to do it, knowing I would look like an idiot, if the stated goals are not achieved. After a while people see a cycle of statements, followed by execution, which is extremely fundable. I’ve always been like that.

Canada is a tough place to be a leader – we don’t like mistakes, we like successes; the role is not appreciated in Canada as much as it is in the US.